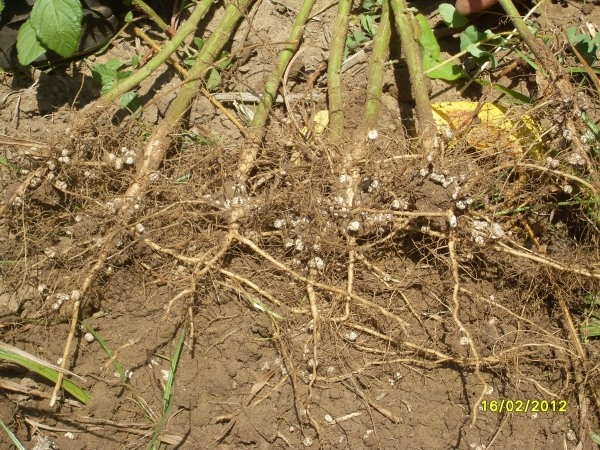 Formulations based on specific Rhizobium for each forage legume and specific Bradyrhizobium for soybean, very highly concentrated and on a completely sterile carrier, both peat and liquid.

The use of legume inoculants is based on a process called Biological Nitrogen Fixation, resulting from the symbiotic relation that can be established between plant species belonging to the family of legumes and bacteria of the Rhizobium and Bradyrhizobium genera. The discovery of this association was made in 1886 by German scientists Hellriegel and Wilfarth.

The particular feature of bacteria of the genera Rhizobium or Bradyrhizobium (generically, rhizobia) is their ability to fix atmospheric nitrogen, through the rupturing of the nitrogen triple bond and its conversion into ammonia, when lodged in the root of the legume plant forming structures called nodules.

The symbiosis established is a biological process of complementation between the macrosymbiont (host legume) and the microsymbiont (rhizobium), by means of which bacteria after nitrogen fixation provide the same to the plant and in turn, the plant provides bacteria with carbohydrates for their metabolism. In this way, the plant achieves supply of its main nutrient, nitrogen, in very large quantities, being the atmosphere the source thereof, wherein nitrogen is in a proportion close to 80%. The nitrogen thus obtained by the plant will then be one of the basic constituents of vegetable protein and part of other compounds such as vitamins, co-enzymes, chlorophyll and nucleic acids.

The process of Biological Nitrogen Fixation forms part of the so-called nitrogen cycle.

Legume inoculants developed from the study of the rhizobium-legume symbiotic relationship. These formulations consist of pure cultures of rhizobia, specific for each species of legume, in high concentration and on a carrier that allows the maintenance of an appropriate physiological state of bacteria, for dosing to the seed of the specific crop. Thus, inoculation with a specific inoculant favors the establishment of symbiosis between plant and a rhizobial strain selected for its highly competitive conditions, infectivity and efficiency of nitrogen fixation. This allows plant nutrition with nitrogen not to depend on nitrogen inputs from the soil (which is based on the content of mineral nitrogen and nitrogen mineralization potential thereof), nor from the addition of nitrogen chemical sources (fertilizers).

Rhizobial strains selected for inclusion in the inoculants must meet the requirements of specificity, virulence and efficiency:

- Specificity: is the ability to form nodules only in certain legumes; the strain in the inoculant must be specific to the corresponding plant species.
- Virulence: is the speed with which the rhizobium infects the root and forms nodules. This property is indicative of competitiveness of the rhizobial strain, which is very important when there are native and/or naturalized strains in the soil with different efficiency with respect to the strain in the inoculant.
- Efficiency: is the level of ability to fix nitrogen with its specific host. The introduction of selected rhizobia to legumes and soil by means of inoculation is a widely recognized agronomic practice worldwide for its benefits in productive and economic terms.

• Inoculation of legumes assures early formation of effective nodules that ensure an adequate supply of nitrogen to the crop throughout the growing cycle.
• Proper inoculation practice, depending on particular soil and environmental conditions, makes possible that the plant, via biological fixation, achieves sourcing of a very high percentage of the nitrogen needed, becoming independent from the need for additional applications of chemical fertilizer.
• Inoculation increases forage production, dry matter and grain yields, and crop quality; it also improves protein content in forage and grains.
• Through inoculation, NBF allows uptake of high amounts of nitrogen by the soil system, which improve natural soil fertility (depending on what is removed from the system in the harvest of the grain or forage) by means of the nitrogen that remains in the soil in crop residues and roots.
• Inoculation ensures excellent green manure. Upon decomposition of legume crops after vegetative growth, a contribution of top quality organic fertilizer which improves soil fertility and yield of subsequent crops is achieved.
• By dispensing with the addition of chemical fertilizers, inoculation helps to preserve the environment, avoiding contamination of water and air by nitrate leaching and ammonium volatilization.